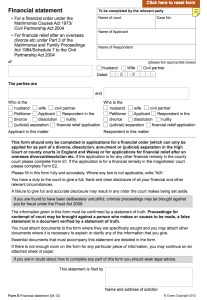 As we discovered just before Christmas, the online divorce Form E provided on the Court website was faulty.  It appears a section of the Form which summarises, amongst other things, the capital and income of divorcing couples, failed to carry forward the liabilities from an earlier section.  The result was that the net capital values produced in the summary section may have been falsely inflated by missing out any liabilities.

The person who claims to have noticed the error (a self-styled family expert)  used the publicity to criticise solicitors, barristers and judges for not having noticed it themselves.   This fed into the usual lawyer-bashing on public forums and comment pages.  Most family lawyers were taken aback by this particular slew of criticism because:

In short, although I have not been slow to have a pop at my fellow lawyers on the pages of this blog, I did think this particular story, as a vehicle to slag off family lawyers, was a bum rap.

The real story is that LiPs have been let down.   These people, the vast majority of this blog’s readership, cannot afford legal advice or struggle to maintain paid legal representation.  I’m guessing it would be LiPs in the main who would have been using the Court service online Form E.  I mean: it’s there to use, it’s free, and it’s on the official court website, so it must be safe to use, right?  Right?

The Minister responsible issued a statement to Parliament: “Update on investigation into faulty online form used in divorce proceedings”.  We now know the number of people likely to have been affected:

“A total of 36,527 cases contain a version of Form E filed from these periods. HMCTS staff have now reviewed all these cases and found that 3,638 files – 10% – contained the faulty calculator version of Form E with an incorrect figure for net assets figure in the summary table.

1,403 of these cases are still live, allowing HMCTS to intervene immediately to clearly flag these cases to the courts in order to avoid the error affecting the final orders in these cases.

The remaining 2,235 files – 6.1% – were closed cases….I have instructed HMCTS to write to all parties in the 2,235 closed cases. The letter expresses our sincere regret for the error, sets out what happened and explains that, although Form E is just one part of the evidence used in their case, there remains a possibility that the error affected the final outcome.”

If you are one of the people with a closed case receiving a letter from the court service you will need to work out whether you may have been prejudiced by the software error.  Apparently, the letter sets out the options available for those parties who think they have been adversely affected, which includes seeking to set aside any final order made or varying such an order.  The letter also contains a link to a specific court form to be used by those who wish to set aside or vary their settlements.  If anyone has received such a letter or has the link I would be happy to post a copy (suitably anonymised) on this blog.

If there is anyone out there who thinks they are affected but has not yet contacted the court to register their concerns then please use the specially designated email address:  formE@hmcts.gsi.gov.uk.  Only 51 people have done so as at 21 January 2016.