December 7, 2012 in Legal services, Technology by Alan Larkin | No comments 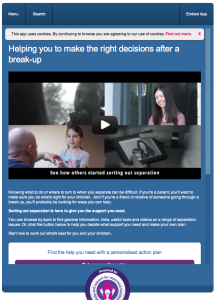 The Department for Work and Pensions (DWP) launched an app at the end of November 2012.  The app is intended to provide assistance to people who are struggling with the issues that arise on relationship breakdown: divorce, child support and so on.   I think the app is the delivery of an initiative announced in July of this year when the press reports talked of a ‘Divorce App’ and the figure of £14M budget spend was bandied around.   I questioned then why £14M was needed for an app.  I now understand the spend was closer to £300,000.  Quite a come-down.

I had a bit of a go in that previous post, unhappy as I was with the brutal staff cuts to the court system and the planned withdrawal of most family legal aid in April of 2013.  My bad humour is not dispelled by the ‘Sorting out Separation’ app now hosted by the DWP.  I’m all for helpful guidance but placing impossible obstacles in the way of access to justice turns me into Mr Angry.  For one beautiful moment, back when the app was launched in November, I saw a link to MailOnline about the app that seemed to share my anger.  At last, I thought, one of the press big beasts has woken up to the threat posed by the withdrawal of legal aid and the insulting attempt to fill the impending void with an app.  Fortunately, natural order was restored once I read the article and realised that the Daily Mail was angry, as usual, for all the wrong reasons.  It was just the usual piece about how getting a divorce or separating was being made even easier.  Strangely enough, most of the readers of this blog seem to find the exact opposite: sorting it out is expensive, complicated and deeply stressful.

However, I have allowed myself to be distracted.  Since my blog is intended to be helpful to the very people who will be most affected by public provision cuts, I have decided to give the DWP’s shiny new app a fair crack of the whip.

STOP PRESS: THE DWP ENCOURAGES GOOD BOY SCOUTS LIKE ME TO EMBED THE APP ON THEIR SITES.  THIS I DULY DID AFTER SPENDING HOURS WORKING OUT HOW TO DO IT.  UNFORTUNATELY, GOOGLE THEN DETECTED THE APP AND DECIDED THAT MY INNOCENT BLOG WOULD INFECT ANY VISITORS WITH MALWARE. MY TRAFFIC FELL OFF A CLIFF. THANK YOU DWP. SO I HAVE REMOVED IT. IF YOU WANT TO USE THE APP PLEASE GOOGLE IT AND YOU’LL FIND IT SOON ENOUGH.

Good luck and let me (and others) know if the Sorting out Separation app is worth the money we taxpayers have just spent on it.