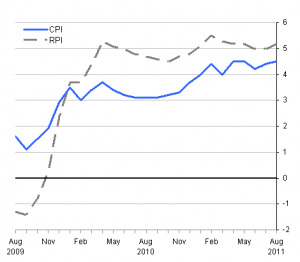 I have written before about whether maintenance payments for spouses and child support on divorce should be inflation-proofed by automatically increasing their value by any rise in the Retail Prices Index (RPI).  I pondered whether such a link could be made instead to the lower figure of the Consumer Prices Index (CPI).  I noted the Government’s quiet adoption of the CPI for the payment of benefits as a way of saving money in real terms.

Divorce solicitors will usually seek to protect the value of their client’s maintenance payments by linking future increases to the RPI.  However, the mass strike by public servants on 30th November this year (in part because their pensions are now subject to the lower CPI link) demonstrates that these policy decisions matter.  Likewise, a client who is awarded maintenance linked to the CPI over 15 years is going to be significantly disadvantaged in comparison to the client whose payments are linked to the RPI.

Rise of the CPI?

Surely this just means that solicitors should demand that the link is to the RPI?   After all, that’s the way it’s  always been, isn’t it?  So, it must be set in stone?  Perhaps no longer. The High Court today decided, in the face of a legal challenge by trade unions, that the Government’s linking of public sector pensions to the lower CPI figure was lawful.  Lord Justice Elias stated, in his judgement:

“The use of RPI has in the past been merely current practice.  Looked at objectively it could not properly be asserted therefore that any promise of its continued use had to be assumed”.

Personally, my view is that a link to the RPI for maintenance payments would still be appropriate since this is an inflation measure that includes the cost of housing (which the CPI excludes).  I cannot imagine many clients thanking their solicitors for securing a link to the ‘poor cousin’ CPI inflation measure.  But, as Lord Justice Elias demonstrated today, in these more economically austere times,  old assumptions may no longer hold true.